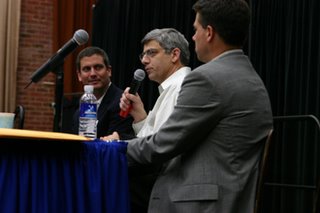 Israel leads the world in high-tech innovation according to panelists from high-tech companies who discussed ties between Israel and the Silicon Valley Thursday.

Three panelists with top positions in high-tech and venture capitalist firms answered questions from an audience of approximately 300 students, faculty and community members about the successes of global Israeli-American companies and the importance of bridging the two regions.

A short movie shown during the event stated that Israel leads the world in research and development investment.

"That's the foundation of a business," said Chris Surdi, former president of the Entrepreneurial Society. "If they're No. 1 in R&D, they're institutionalized in the global market."

Consul General of Israel for the Pacific Northwest David Akov said the reason Israel leads in research and development might be that the country has no oil. "It makes you work, think and create innovation," Akov said.

Panelist Dave Welsh, a partner in Partech International, a venture-capitalist firm, offered an investor's view of the Israel-Silicon Valley alliance.

"We saw a lot of technological innovations starting to evolve in Israel over the past 10 to 15 years," Welsh said. "Israel has been the best per-company place to make returns. In the end, ... we make money there."

Zoran has its business management in Sunnyvale and its entrepreneurship and innovation in Israel.

Some professors sent their classes to the discussion, hoping students could learn more about global business models.

Professor Anu Basu, director of SJSU's Silicon Valley Center for Entrepreneurship, said students who will enter in the upcoming business plan competition could use the panelists' suggestions.

"It showed the importance of going to the potential customer," Basu said. "Run the idea by people first."

Surdi said he hopes to launch a business and enter it into the competition.

"Getting knowledge about Israel and the research facilities there is an integral part of our business plan," Surdi said.

"I'm hoping this program will lead to a business exchange program," said David Ben-Israel, a sophomore majoring in business. "I think students in both areas have a lot to learn from each other."

Jennifer Boldrini, a junior majoring in business management, said she learned more about resources in other countries.

Panelist Dan Harkabi, who pioneered flash memory technology, sold his company to SanDisk, where he is currently the vice president of secure contents solutions. He said he understood the need to join a major partner.

"A healthy approach: you cannot win it just by yourself," Harkabi said. Although the technology came from Israel, Harkabi said, the consumer was not there.

President of the Turkish-American Business Connections Association Efe Orhun said he attended the event to get ideas to improve technological trade relations.

Surmi Chatterjee, a graduate student in computer engineering said she was interested in what panelists said on starting a business in the computer industry.

Some audience members asked to know the secret to the panelists' success. Harkabi said anticipating trends and future technology is key.

All three panelists agreed that Israel keeps ahead of competition in places like India because of the loyalty of employees. Ofir, who has worked for Zoran since 1991, said retaining personnel is "one of Israel's skills." The turnover rate for engineers is too high in India, Welsh said. "Consistency almost overrides raw talent."

Professor Burton Dean, the moderator of the panel, said Americans tend to see their career in many jobs.

There have been similar events at Stanford University and University of California Berkeley in order to show Israel "beyond the conflict," Tzach Segal, director of business development at the consulate, said.
Posted by Laura Pasek at 12:51 PM

Oh, ha! I took that photo (and I recall also mailing a CD of the rest of the shots to Hillel). Yeah, I thought your name looked familiar.